MAGEEC is an open source project which combines work on compilation options which save energy with work on machine learning, to create a compiler framework that is capable of generating code that has improved energy efficiency.

As with many open source projects we have our own wiki, mailing lists and IRC channel, and over the coming months we’ll be working to engage with the wider community.

There is a small core of people working on MAGEEC throughout the next 18 months:

However, MAGEEC provides the opportunity for many others to participate, and current collaborators include:

Each will introduce themselves via blog posts here, but many also have their own Wiki entries, such as mine.

How will the MAGEEC software work?

We are still in the early stages of design work — Simon Cook will write more about this in future posts. However, one very early design decision is reflected by the importance of independence from any one compiler, and so MAGEEC will always work through a compiler’s plug-in interface. This plug-in interface will be required to supply details of the features of programs being compiled and to be capable of controlling the compiler’s pass manager.

Similarly we have taken an early decision to provide a clean interface to the machine learning system. For training this will supply data on program features and passes used with the associated performance metric (in this case energy consumption). In use it will take a set of program features and return information about the optimization passes to use. So from a high-level view the code is as follows:

Measuring actual energy consumption is a very important part of the project. At its simplest this involves putting a series resistor (typically 0.1Ω) in the power line and measuring the voltage drop across it. But we do need to do this at high frequency and to collect the data automatically.

Our latest energy measurement board can take 6 million samples per second, getting us close to being able to measure the energy consumed by individual instructions. 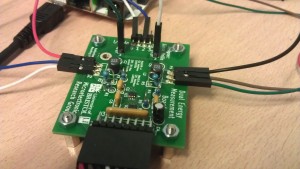 Who’s paying and why?

MAGEEC is supported by the Technology Strategy Board (TSB) under its Energy Efficient Computing Initiative. Running for 18 months from June 2013, it is a joint project between the open source compiler and silicon chip modeling company, Embecosm, and Bristol University’s Department of Computer Science.

The TSB is the UK’s “innovation agency” and its goal is to boost the competitiveness of UK businesses. MAGEEC will allow Embecosm (a British company) and Bristol (a British University), to further establish their leadership in the field of energy-efficient software development. As part of this journey junior engineers at both organizations will have the opportunity to develop their abilities in a first class R&D environment.

This is a somewhat non-technical post providing an introductory overview of MAGEEC. Future posts will dive into detail on all aspects of the project as it develops, and most importantly all the software and hardware designs will be made freely available.

Dr Jeremy Bennett is Chief Executive of Embecosm, a software company specializing in open source compiler development and hardware modeling. He was previously CEO and CTO of Tenison Design Automation, which provided silicon chip modeling tools. A former academic, he is the author of the standard textbook, Introduction to Compiling Techniques (McGraw-Hill 1990. 1996, 2003).

From: Uncategorized
← MAGEEC
Monitoring Energy Consumption on Embedded Platforms →
No comments yet